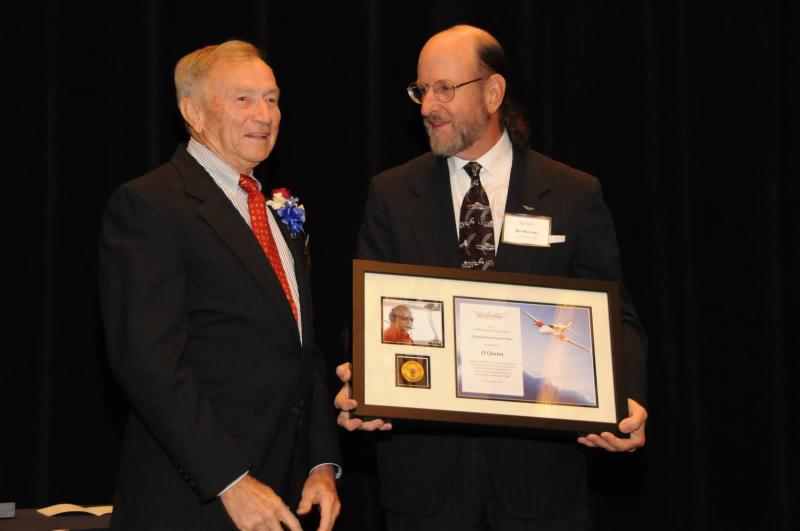 Each year, the Public Benefit Flying Awards have been presented in a ceremony in the United States Capitol Building, or in more recent years at the Fall Awards Program of the National Aeronautic Association (NAA).

NAA traces its roots to the Aero Club of America, founded in 1905. Since its beginning, NAA’s primary mission has been the advancement of the art, sport, and science of aviation in the United States, including space flight. Through its annual national awards program, NAA “celebrates the past,” while at the same time recognizing the achievements of those who are developing technology and “inventing the future.”

The NAA is famous for a number of nationally prominent awards that have been given since early in the history of flight, such as the Robert J. Collier Trophy, the Wright Brothers Memorial Trophy, the Frank G. Brewer award for aviation education, and the Elder Statesmen of Aviation awards.

The first NAA/ACA awards for Public Benefit Flying were presented on September 10, 2003, celebrating the service and accomplishments of the many volunteers in aviation who “fly to help others,” performing missions of community and individual service. These awards were developed by NAA in association with the Air Care Alliance.

The awards have been divided into five categories:

Distinguished Volunteer Pilot
-awarded to an individual or individuals for outstanding public benefit flying service as a volunteer pilot.

Criteria: Performance that exceeds expectations and distinguishes nominee volunteers and their efforts. Consider the amount and nature of effort, commitment, sacrifice, and impact on clients, organization, and community.

Distinguished Volunteer
– awarded to an individual or individuals for outstanding service as a non-flying volunteer working in public benefit flying.

Criteria: Performance that exceeds expectations and distinguishes non-pilot volunteers and their efforts. Consider the amount and nature of effort, commitment, sacrifice, and the impact on clients, organization, and community.

Criteria: Outstanding achievement or contribution by an individual, group of individuals, an organization, or group of organizations that significantly raised the standard of service, improved the state-of-the-art, or contributed to the advancement of Public Benefit Flying overall. Consider the size, complexity, and unique value of the achievement and its positive impact on public benefit flying.

Criteria: This award is intended for individuals or groups not directly or primarily involved in public benefit flying, for extraordinary support and contributions providing fair winds beneath the wings of public benefit flying organizations and their volunteers. Consider the nature and scope of the support itself and/or its impact on encouraging others to provide the necessary lift for public benefit flying.

The annual awards were presented in ceremonial rooms on the Senate side of the Nation’s Capitol Building, with additional awards presented at other venues.

Please visit each year’s awards program button to view information about that year’s recipients and event.

The latest nomination information can be found on the NAA website at www.naa.aero.

Nominees must be either U.S. citizens or U.S. organizations.

Public Benefit Flying is defined as those activities, conducted largely by volunteers, in which one or more general aviation aircraft were used to support the health and well being of anyone needing charitable assistance or for the benefit of the general public, and for which no fee was charged for the aircraft or for pilot services.

Awards are intended to honor the efforts of volunteers working in the field of public benefit flying, or those who support them. Awards may be granted to individuals, teams, groups, or organizations, as appropriate.

Awards may be based on just one or on several extraordinary events or accomplishments or may be based on long term or lifetime achievement. This must be clearly expressed in the nominating material.

Nominators and nominees must understand that the award recipient or a representative is expected to attend the ceremony in Washington D.C. to personally accept the award. Neither NAA nor ACA are able to fund the expenses for attending.

How to Submit Nominations

Nominations are accepted annually between May 1 – August 31.

To ensure that your nomination receives full consideration please adhere to the current NAA’s guidelines and submission process.