The 2016 National Public Benefit Flying Awards will be presented at the Fall Awards Banquet Program of the National Aeronautic Association on December 8, 2016.

We strongly encourage you to consider attending this prestigious event in the Washington D.C. area!  You can read about NAA events on this page:  https://naa.aero/events

See the news release about the award recipients and the upcoming event below!  More information will be posted afterwards.

Washington, DC, September 28, 2016 – The National Aeronautic Association (NAA), in partnership with the Air Care Alliance (ACA), a nationwide league of humanitarian flying organizations, is pleased to announce the recipients of the 2016 Public Benefit Flying Awards. These awards were created to honor volunteer pilots, other volunteers, and their organizations engaged in flying to help others, as well as those supporting such work.

This year’s recipients are:

Over the past eight years, Jeff Bennett has flown 4,938 service and therapy animals, search and rescue dogs, military working dogs, homeless and abandoned pets, and endangered wildlife for Pilots N Paws. He has generously donated thousands of hours of his time, all fuel costs, and the use of his plane to the organization. Bennett has helped to coordinate the Pilots N Paws Annual Fall and Spring Flyaway events, where dozens of pilots work together on a single day to move hundreds of animals. He is a team player, incredible mentor, seasoned coach, and a fan favorite among volunteers and adoptive families of animals he has flown.

Rol Murrow is the cofounder and Chairman of the Air Care Alliance (ACA), a support group for more than sixty volunteer pilot aviation groups engaged in public benefit flying work nationwide and internationally. With Murrow’s expertise and guidance, ACA is able to match individuals with organizations whose volunteers fly patients for care, provide disaster relief services, support the transportation needs of veterans, perform environmental support flights, relocate animals, and provide many other services on a charitable basis. Murrow also served on the founding board of the Alliance for Aviation Across America in order to emphasize the value of charitable aviation.

In 2012, Angel Flight West developed a new version of their web-based application used to support the coordination of its charity flights and released this software under an open source license for the charitable aviation community. An organization called VPOIDS was formed to manage the software and the user community, facilitate communication between consumers, help determine priorities, identify opportunities for solving common problems, and coordinate design and development efforts.

VPOIDS has enabled its member Volunteer Pilot Organization’s (VPO’s) to save money in a number of significant ways and allowed the organizations to focus on their core missions. Due to the generosity of Angel flight West and its partnership with VPOIDS, many organizations have gained access to a technology platform that they would otherwise not have been able to afford, resulting in a greater impact and strengthening of charitable aviation as a whole.
Members of the 2016 Public Benefit Flying Selection Committee were NAA Board Members Bob Stangarone (Stangarone & Associates), Dave Franson (Wichita Aero Club), and Dick Koenig; Peter Bunce, President and CEO of the General Aviation Manufacturers Association; Rick Durden, Air Care Alliance Board Member; Lindy Kirkland, Executive Vice President of the Air Care Alliance; Linda Daschle, President of LHD & Associates, Inc., and Jonathan Gaffney, President and CEO of NAA who served as the Chairman of the Selection Committee.

The Public Benefit Flying Awards will be presented at NAA’s Fall Awards Ceremony on December 8, 2016 at the Crystal Gateway Marriott in Arlington, Virginia. For more information, please visit www.naa.aero.

The National Aeronautic Association is a non-profit membership organization devoted to fostering opportunities to participate fully in aviation activities and to promoting public understanding of the importance of aviation and space flight to the United States. NAA is the caretaker of some of the most important aviation awards in the world, and certifies all world and national aviation records set in the United States. For information, visit www.naa.aero.

The Air Care Alliance is a nonprofit public service organization supporting the work of dozens of volunteer-based charitable organizations whose members fly to help others. ACA is devoted to fostering, enhancing, and promoting public benefit flying in the United States and other countries. For information, visit www.aircarealliance.org .

ARCHIVED PAGE BELOW OF NOMINATING INFORMATION FOR THE 2016 AWARDS INCLUDING CRITERIA FOR THE AWARDS:

Nominations Are Due Now for the National Public Benefit Flying Awards in our Nation’s Capitol!  Send Yours by August 31.

After the awards ceremony in Fall of 2016 this page will show the recipients of the awards and other information about the event!

… for thinking of how you can honor those who contribute so much to volunteer-based Public Benefit Flying! 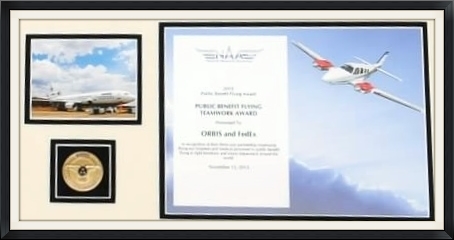